I read this today and it made me really happy.

"The Seinfeld cast is making another must-see appearance. EW has learned exclusively that the four stars of NBC's long-running comedy -- Jerry Seinfeld, Julia Louis-Dreyfus, Jason Alexander, and Michael Richards -- will be featured in a multiple-episode story arc on HBO's Curb Your Enthusiasm this fall. The cameos will mark the first time that all four actors have appeared together in a scripted TV show since Seinfeld went off the air nearly 11 years ago. No date has been set for this event, or for Curb's seventh season, which will run for 10 weeks. Curb, of course, was created by and stars Larry David, the cocreator of Seinfeld.

The episodes, which are currently shooting in Los Angeles, appear to represent a continuation of David's relationship with the Seinfeld stars. As Curb fans know, Seinfeld, Louis-Dreyfus, and Alexander have made individual appearances on the award-winning series over the years."

I LOVE seinfeld..even to this day, when I catch a rerun, even if I've already seen it a zillion times, I still watch it and laugh. I was actually really late in watching it. My mom took away cable when I was in 9th grade saying it was bad for me so she cut the cable! I think it was because I was watching too many music videos on MTV and had totally tuned into a ska-punk chick that she didn't like it..but that def didn't stop me! HAHAHA..anyway I missed the whole era of seinfeld and friends. I remember everyone in school talking about the shows and how funny they were but I never knew what it was because I didn't have TV! Anyway, when I was 19, a friend taped a bunch of episodes for me and gave it to me to watch..it was my favorite video ever and since then I was hooked..I lived on my own and had cable and would watch as many as I could since they would play back to back episodes every night..it is really sad that there aren't many funny sitcoms on tv anymore..it's all reality shows =(

I am definitely going to watch curb your enthusiasm when it comes on..soooo excited!!

On the food note, last night I made this amazing pasta that was sooo yummy!! I just kind of threw things together and jazzed up a pre-made sauce with a bunch of stuff and made my own garlic bread..soo yummmmmmmm I could eat it every night! =) 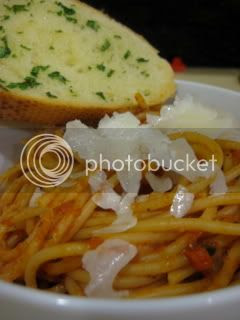 Ida said…
I have never watched it! Will have to now;)