Today was really ugly..and the rain was on and off all day. I could see it come and go while I was at work..but at least the rain stopped enough for Z to go to the park when I got home. I was so tired and really wanted to just sleep after I took a shower, but I felt bad the he hasn't been able to play much because I've been too tired..so I sucked it up and took him to the park..he had a lot of fun on his play date with L, Y, & H...it's amazing to see him growing and now wanting to play with other kids..before he didn't seem to care as much.. 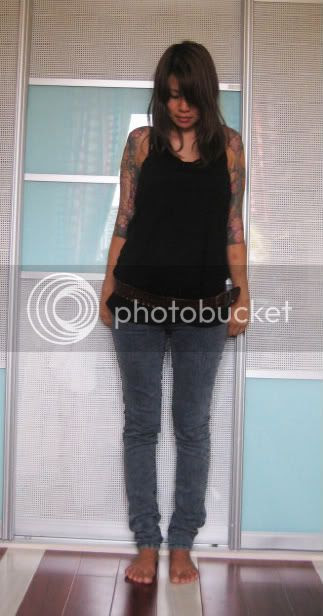 Ida said…
Very pretty. It is amazing how quickly children grow up, and all of a sudden have their very own concerns/joys, no? :)

Love + Cake said…
I really like those jeans on you...I think they look fabulous :)

Kandace said…
Cute outfit and I love your blog name. Are you vegetarian, vegan, or just a tofu lover? :)

Kandace said…
btw i think i posted under the wrong name so here's my real one. anyway really enjoy your blog.

micol zanzuri said…
i love this look and i'm in love with your tattoos!!!